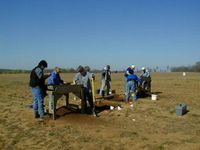 On Saturday, February 12th at 1:30 p.m the Old Bridge Central Library will welcome Dan Sivilich from the archaeology group BRAVO to give a presentation on the Battle of Monmouth and the group’s research. On June 28, 1778 the two great armies of the American Revolution met on the plains of Monmouth Courthouse and clashed in the largest battle of the war. The 3rd Brigade of British Foot (42nd Regiment) was one of Sir Henry Clinton’s most seasoned and battle-ready units in his command. This distinguished unit of Highlanders was repulsed by an American unit of hand-picked men from several New England Regiments which turned the tide of battle. What caused the Highlanders to leave the field of battle? For more information call (732) 721-5600 ext. 5033 or e-mail Tim.

We just received word from Dan to tell us that the History Channel will be replaying their Battlefield Detectives program that features the BRAVO group and their Monmouth research at 11:00 p.m. on Friday, February 11th.