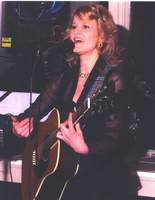 The Old Bridge Library will host a concert of acoustic folk music from Old Bridge native Karen Anne, on Saturday, January 22, 2005 at 1:30 p.m. Karen is a resident of Old Bridge whose performances throughout Monmouth, Middlesex, Hunterdon and Mercer counties have taken off since her debut showcase in January 2004.

Karen Anne’s originals evoke a sense of peace and hope amidst life’s challenges, leaving the listener feeling refreshed. Her angelic vocals are soothing to the ear, and her clear vocal tone has been equated to the “etched in glass” quality of Art Garfunkel’s. Her guitar accompaniment has been described as possessing “personal flair which makes every song uniquely her own.”

A music therapist by trade, Karen Anne describes herself as “an independent songsmith and performer, having fun by reaching out to touch the lives of others in the way I know best – through my heart in music.”

Appearing at the Library with Karen Anne will be special guest singer and guitarist Patti Bramson. For more information about this concert, please call (732) 721-5600 ext. 5033 or e-mail timnil@lmxac.org.